From #1 New York
Times Bestselling author Jennifer L. Armentrout, comes THE PRINCE, a
new novella in her Wicked Series, brought to you by
1,001 Dark Nights!

Be sure to grab your copy today!

She’s everything he wants….

Cold. Heartless. Deadly. Whispers of his name alone bring fear to fae and
mortals alike. The Prince. There is nothing in the mortal world more dangerous than him. Haunted by a
past he couldn’t control, all Caden desires is revenge against those who’d wronged him, trapping him in
never-ending nightmare. And there is one person he knows can help him.

She’s everything he can’t have…

Raised within the Order, Brighton Jussier knows just how dangerous the
Prince is, reformed or not. She’d seen firsthand what atrocities he could be capable of. The last thing she
wants to do is help him, but he leaves her little choice. Forced to work alongside him, she begins to see
the man under the bitter ice. Yearning for him feels like the definition of insanity, but there’s no denying
the heat in his touch and the wicked promise is his stare.

But there’s someone out there who wants to return the Prince to his
former self. A walking, breathing nightmare that is hell bent on destroying the world and everyone closeto him. The last thing either of them needs is a distraction, but with the attraction growing betweenthem each now, the one thing he wants more than anything may be the one thing that will be hisundoing.

She’s everything he’d die for….

Did it make you a bad friend if you were completely, a hundred percent envious of that friend? Yes? No?
Kind of?

I figured it was somewhere in between.

That’s what I was mulling over as I watched Ivy Morgan brush thick, red curls over her shoulder, laughing at something her boyfriend Ren Owens had said to her.

At least I wasn’t envious of that—their love. Okay, well, that wasn’t entirely true. Pretty sure anyone who was as single as me would be envious of all that warm and fuzzy that was passed back and forth with each long look or casual brush of skin. The two could barely tear their gazes away from one another to eat the dinner we’d grabbed at the cute little diner inside the shopping center on Prytania Street.

I honest to God couldn’t be happier for them. They’d been through so much—way more than two people should ever have to go through to be together, and here they were, stronger and more in love than ever, and they deserved that happiness.

But their epic love story wasn’t the source of a current case of the green-eye monster that was sitting on my shoulder.

Ivy was just such a… badass.

Even right now, relaxed in the chair, surrounded by twinkling Christmas lights with her hand in Ren’s and her belly full of a cheeseburger deluxe and crinkle fries and half of my tater tots, she could kick ass and take names along with addresses, telephone numbers, and social security numbers.

If the proverbial poo hit the fan, you called Ivy or Ren.

If you needed to know what streets Royal intersected with, you called… me. Or if you needed coffee or fresh beignets but were currently busy, you know, saving the world, you’d call me.

The three of us were all members of the Order, a widespread organization that was literally the only thing that stood between mankind and complete, utter enslavement and destruction by the fae. And not the super cute fae found in Disney movies or some crap like that. Humans thought they were on top of the food chain. They were wrong. The fae were.

The only thing pop culture got right about the fae was their slightly pointy ears. That was it. The fae were more than just beings from another world—the Otherworld—they were capable of glamouring their appearance to blend in with humans. But all Order members, even me, were warded at birth against the glamour. We saw through the human façade to the creature that lurked beneath.

Armentrout lives in Martinsburg, West Virginia. All the rumors you’ve heard about her state aren’t true. When she’s not hard at work writing. she spends her time reading, working out, watching really bad zombie movies, pretending to write, and hanging out with her husband and her Jack Russell Loki. Her dreams of becoming an author started in algebra class, where she spent most of her time writing short stories….which explains her dismal grades in math. Jennifer writes young adult paranormal, science
fiction, fantasy, and contemporary romance. She is published with Spencer Hill Press, Entangled Teen and Brazen, Disney/Hyperion and Harlequin Teen. Her book Obsidian has been optioned for a major motion picture and her Covenant Series has been optioned for TV. She also writes adult and New Adult romance under the name J. Lynn. She is published by Entangled Brazen and HarperCollins. 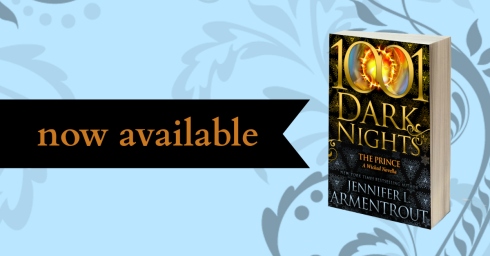